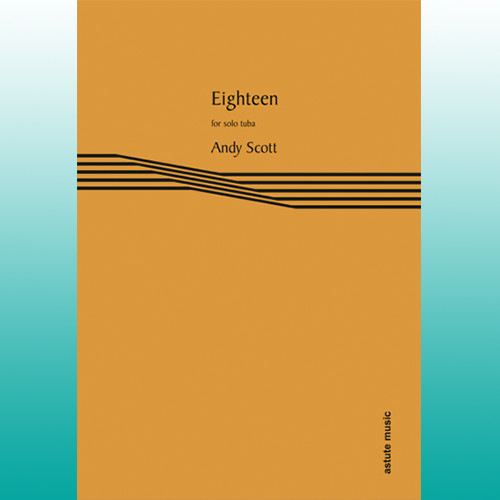 Scored for solo tuba 'Eighteen' is a dynamic exploration of rhythm, energy, angular intervals and melodic development. Originally commissioned for solo saxophone, by friends and family of Spencer Moran, to celebrate his eighteenth birthday, Eighteen has also proved popular with flute players, being recorded by the virtuoso Andy Findon on the CD 'The Bad Tempered Flute - the Flute Music of Andy Scott (Nimbus Alliance). The tuba version of Eighteen was arranged for and premiered by Les Neish, at ITEC in Linz, Austria in June 2012.

A strong internal pulse is the key to an effective performance of 'Eighteen', the rests being as important as the notes. Pay careful attention to given dynamics and articulation, which all add to the overall shape and form of the piece. 'Funky & Hard Edged' is the initial stylistic guide, indicating that 'Eighteen' should be played with a 'take no prisoners' attitude!